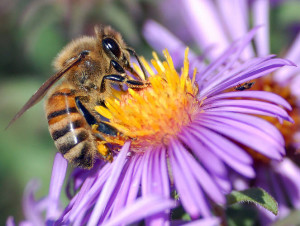 Eagerly awaited summer is here with plenty of opportunity for outdoor activity. I go into my garden for my afternoon tea, savoring not only the tea, but the beautiful lushness of the garden at this time of year.

I find that I have companions–my cat Clementine is stretched out beside me soaking in the sun and a woodpecker is at the suet feeder. In addition I am thrilled to see an abundance of bees eagerly savoring nectar.

Apparently these bees have missed the news about colony collapse! As I look in wonder at the bees eagerly at work, being a Naturopathic Doctor who practices Homeopathy, I can not help but think of bee stings and remedies that help with bee stings!

There is of course Apis mellifica simply called Apis which is derived from bee venom. It is useful not only for bee stings, but for any insect bite where the result is swelling, redness and stinging pain in the area of the attack. The bite will feel worse from warm applications and better from cold.

Another remedy to consider is Ledum which can be also be

used for any insect bite where there pain is relieved by cold applications and the affected part is worse from touch.

One of my favorite experiences regarding a bee sting happened some years ago. A house painter working at my house came to see me with a concerned look on his face.

“I just got stung by a bee,” he reported as he pointed to the bite on his forearm near his wrist. “In a half hour, my arm is going to be completely swollen; it will be huge-at least twice its normal size. Do you have anything?”

The bitten area was red, hot and swollen to the size of a quarter and on that basis I knew the painter would be benefited by Apis.  He did not look at all pleased when I returned with Apis pills as he had not used a Homeopathic remedy before, but he decided to give it a try.

I told him I would keep a good watch on him and I would check in with him in 15 minutes, but that he should see me earlier if he had any concerns.

I checked on him in 15 minutes; The pain had disappeared; the swelling had gone down and the point of entry of the sting was barely visible. I checked in on the painter in another 15 minutes. His arm was totally fine. “I don’t know what this stuff is, but it’s amazing!”

Not only did Apis resolve the pain almost immediately, it prevented a much larger problem from occurring. It is wonderful that in acute situations such as bee stings Homeopathy remedies will act quickly and effectively.

Finally, Hahnemann Laboratories is a good source of all potencies including the higher ones and can get remedies to you overnight.